Skip to main content
Labels
Posted by Randy Kirk May 17, 2013

13 Years Has Seen 47% Increase in Americans Cycling To Work Increased by 47% — Bike To Work Week Special!

Bike to School day has already passed on May 8th, but that doesn't mean you shouldn't encourage your children and school age nieces, nephews, brothers, sisters, and friends to participate in this healthy and fun event!! Who knows? Maybe once the week is over they will desire to keep riding their bike to school! 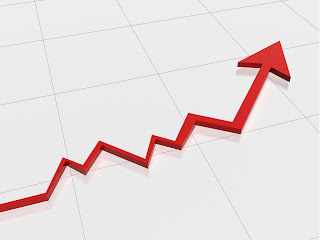 According to the US Census Bureau's American Community Survey, the share of Americans Commuting by bike has grown by 47% since 2000! AND - Many Bicycle Friendly Communities have more than DOUBLED their bike commuter share since 2000!

Also since 2000, the 39 Bicycle Friendly Communities, (taken from America's 70 largest cities and deemed such by the League's Bicycle Friendly America program) saw an average of an 80% increase in bicycle commuting. In contrast, the bike commuter rate in the 31 largest non-Bicycle Friendly communities grew only 32% (which is still great!)

In celebration of these facts and to kick off National Bike to Work Week, the League announced it's latest round of Bicycle Friendly Communities. They have added 17 new BFCs, which brings the 47-state program up to 259 Bicycle Friendly Communities. This program has been helping transform the community's priorities and evaluation of life quality by promoting cycling, hosting education programs in regards to cycling, and investing in infrastructure and municipal policies. 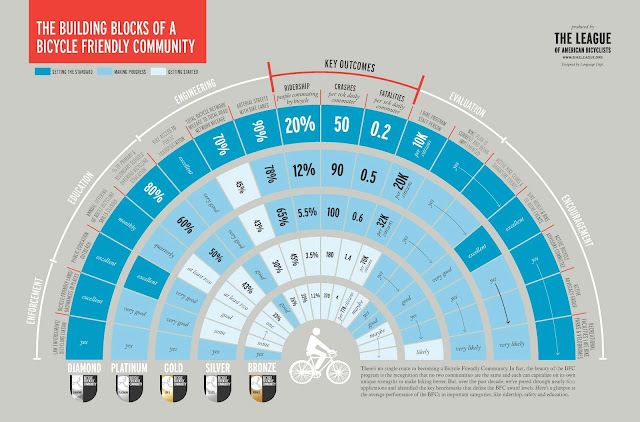 As you review the materials, you'll see that all types and sizes of communities can be positively affected by increased bicycle accommodations. Whether decisions that affect your bicycle plan, routes, and facilities occur in a township, town, borough, city, or county level. this application can help framework a discussion with your decision makers. Also take a look at The League Of American Bicyclists Bicycle Friendly America brochure. You can order free copies of the print version by sending an email to bfa@bikeleague.org.

2. Evaluate your community with the League's Bicycle Friendly Community Scorecard

Take a few minutes to complete this quick scorecard to see how your community stacks up in bicycle friendliness. The scorecard allows you to take an objective look at your community to determine if it already has the basic foundation for a Bicycle Friendly Community.

3. Review the application yourself to see how bicycle-friendly your community is today.

Is there a written policy on maintaining bicycle safe streets? Is there a bicycle advisory committee and/or a bicycle coordinator? These basic resources can be vital to a town's ability to respond to bicyclist's needs. Highway engineers often will not change their practices unless written policy tells them to do so. A bicycle advisory committee is a good structure for getting such new policies written and formally proposed. Having someone on staff designated as bicycle coordinator can be crucial in achieving these measures. (Remember, it is a cardinal rule in every bureaucracy that any task not specified as someone's job is a task that will never get done. Click here to view the application. Pleas note that only applications submitted on-line will be accepted.

Obviously, if the mayor is a ride leader in the local bicycle club, your strategy is simple - show him or her the application! Most communities will take a little more work. First, you must identify the decision makers responsible for the policy changes you seek. In big cities, the mayor's office would typically delegate responsibility to the city's head of transportation or public works. In a smaller town, there may be a full-time city manager that reports to a citizen city council. In any event, you must make some calls to determine who needs to be persuaded before you can set out to persuade them. Next, find one or two bicyclists who have some influence with the decision maker. If you're lucky, there is a local government official who is an avid cyclist. Without such a person, identify the most visible bicycle dealer in town and the leader of a local bicycle club. Ask around and find support. If you are a bicyclist who is already known and trusted by government leaders, your work will be much easier.

Ask for a letter recommending the Bicycle Friendly Community program from any organization that might be inclined to support better cycling. The local bicycle club is a natural first choice, but local environmental groups, civic organizations, businesses and others will tend to cooperate if you make it easy enough for them. Draft the letter for them so they know exactly what you need to minimize the amount of work you ask of them. The Bicycle Friendly Community program frames positive change for bicyclists into the form of a "yes or no" question to a political leader: "Will you support this program?" Politicians hate to say "No" to anyone. They especially do not want to say "No" to an organized group of people. And it's not likely they will want to say no to many different groups.

6. Call your government official and request a meeting.

Attend with your best spokesperson and copies of the letters of support with you to the meeting. Talk about the benefits that the bicycle improvements you desire, as well as the benefits of a Bicycle Friendly Community designation.

7. Ask for something specific and try to get a specific commitment.

A good starting point is to ask if the person will submit the application for Bicycle Friendly Community status. Another good ask is how long it will take to designate a bicycle coordinator. One way the city can show its support for building a Bicycle Friendly Community is by adopting the Action Plan for Bicycle Friendly Communities available here. You could also propose working with the new coordinator on implementing the other bicycle-friendly criteria items (such as convening the bicycle advisory committee, proclaiming Bike to Work Day, developing bicycle safe engineering policies, etc.) Be specific in your requests and, if the official raises concerns, ask him or her to be specific. Following the meeting, write a thank you memo that spells out your understanding of what was agreed to.

Lack of persistence is the downfall of many a bicycle advocate. Motivated people motivate politicians and their employees. If you raise an idea and then don't pursue it, they grow suspicious about just how important the idea is to you. So many people are clamoring for their time and attention, they will forget if you make yourself forgettable. Keep calling back and keep going back. Commit to the result and make it happen!