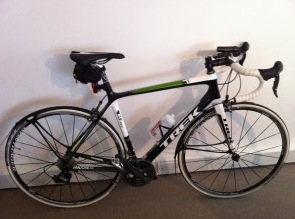 Roughly six weeks ago, I treated myself – yes, spent my own money – to a new bike to replace my test Dedacciai Strada Assoluto – a bike that I had ridden with some gusto and enjoyment during summer and autumn last year. I was sad to see her go back and am hoping she gets a good home.
Now then, four of those said weeks have been spent coughing my lungs up due to a chest infection (I’ll spare you fine readers the rest of the details), but over the Christmas break I finally managed to swing a proper leg over my new all-American hero. (You need to say all-American with a John Wayne-style accent, I find.)
I once sat in a pub with a well-known cycling writer and a Trek marketing person and watched with hilarity as this quote was laid down to the ashen-faced rep. “In my opinion, Trek are the better-handling bikes, but given the choice for the long term, say 20 years – I’d go with a Giant.”
Now, ordinarily, you would think this was a near-the-knuckle thing to say to the former’s representative. But, you will note that four strong beers and a homemade pork pie can certainly bring out the underlying truth.  He stuck to his guns too, you’ll be pleased to hear folks.
So then, with this in mind, I pondered whether to go short or long term. Well, there’s a strong possibility we’ll have discovered, populated and duly begun to ruin another planet in 20 years, so I might have to go with the ‘short term is best’ option. Besides, all bikes will be touch screen by then anyway – won’t they?
Without further ado, here are some early thoughts so far on the Madone 4.9…
The ride
It’s quite unfair of me to compare this bike to my previous Italian number. There’s no comparison – the Trek is fantastic. Smooth, quiet, purposeful, dynamic, light as a feather and made of what feels like higher-spec carbon – there’s a real premium feel to it. Even the Bontrager saddle, which I’ve seen replaced almost immediately on RCUK test bikes in the past – is very comfortable and well made. I see no reason to part with this one. Indeed, it pains me to say it as a lover of the Italian bike scene but this really could be Clint Eastwood’s finest hour – for the money. Time will tell, of course.
The  Madone 4-Series bikes sit neatly in the ‘WMNDM’  – my Wife Might Not Divorce Me if I buy this without permission – bracket from £1,775 to £2,700 [how do you work that one out? -ed] and is well specced for the money. The top version, this version, comes with Dura-Ace Lite, although this is basically only cranks and rear derailleur for those who have just begun to jump up and down uncontrollably.
Trek boffins have completely redesigned this series for 012 and like the VW Golf, rumour has it that their tweaks have improved on what I feel is an already very good ride.
The looks
They are absolutely knockout, thanks to a great paint job. Trek finish their bikes incredibly well and the paint scheme on this model is exactly to my taste, but this will always be horses for courses. If you’ve got enough cash and want a Trek, you’ll no doubt be going through their bells-and-whistles Project One system but, as I’m a tight-fisted [and some – ed.], flash-Harry so-and-so from Essex, what’s not to like from my point of view?
I’m looking forward to spring now; not because winter’s generally cold, damp and foggy and we only get what feels about two hours of daylight at the moment, but because the thought of riding this bike on a lovely spring morning makes the winter gloom disappear quite quickly. The last word, however, goes to another all-American hero. Take it away, Steve…”I would rather wake up in the middle of nowhere than in any city on earth.”
*** Article Originally Published by RoadCyclingUK
Labels: trek bicycles kentucky trek bicycles ky trek bike shop kentucky trek bikes kentucky trek bikes ky trek madone trek madone 4.9. trek madone 4.9 bicycle