Check Out Trek Headquarters With Us at Schellers Cycling 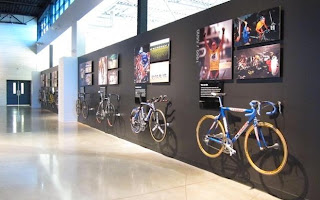 Trek Bicycle Corporation’s HQ in Waterloo, Wisconsin is an impressive place to visit. The 205,000 sq ft facility houses 800 employees, and one of the only large-scale bicycle manufacturing factories left in the US.
The employee roster breaks down roughly 50/50 when comparing white to blue collar workers, illustrating that Trek's domestic production is more than a token effort. The 400-or-so-strong white collar workforce makes up the vast majority of Trek’s engineering, product management, graphic, marketing and business support staff. However, Trek also maintain a three-person suspension development lab in Southern California, run by Jose Gonzales.

At the heart of their Wisconsin headquarters is Trek's carbon manufacturing. All of their Madone 6 Series road bikes – 16 models, if you include framesets –are made in Waterloo, along with other top-tier models including Speed Concept 9 Series time trial bikes, and Top Fuel, Fuel EX 9.9, Remedy 9.9 and Superfly 100 full-suspension rigs, are made in Waterloo. Trek's US production amounts to roughly 25,000 bikes annually.

Unfortunately when BikeRadar called on Trek, the production line was filled with 2013 bikes so our tour guide, mountain bike brand manager Travis Ott, wasn't allowed to show us the factory. Waterloo also serves as the base for Trek’s Project One program, which allows users to pick custom graphic and paint packages, as well as the sizing and specification of their new bike.