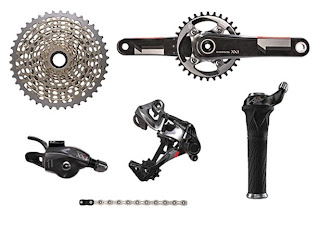 The SRAM X01 drivetrain carries on the tradition of SRAM’s championship-winning 1X™ philosophy—all the way down the mountain.


The setup is simpler. The drivetrain is lighter. And the shifting is fast and solid. Bottom line: X01 is the right one for any terrain, every time. RELENTLESS. 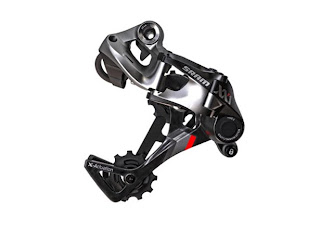 "The XX1 rear derailleur looks different from other gear changers, owing to its “straight parallelogram” design. Unlike most current derailleurs, which use a slanted parallelogram to follow an angled path and maintain a constant gap between upper pulley and cogs, this one moves only in a horizontal plane.

To maintain the proper chain gap, XX1's upper pulley is radically offset from the center of the pulley-cage pivot. As the rider shifts, the pulley cage rotates to take up the chain slack, causing the upper pulley to move vertically, keeping it close to the cogs. SRAM claims this design, 'is faster, reduces shift force, and eliminates ghost shifting.' " 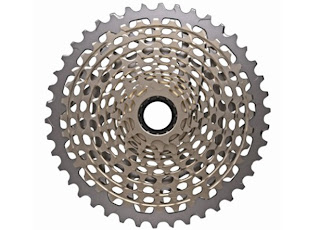 The XX1 cassette is eleven speeds, with a 10-42 range. SRAM developed a new, patent-pending body they call XD to deal with the sizing issue between the 10 tooth cog and a standard hub's driver body. Chris Hilton (SRAM's external drivetrain product manager) said SRAM shortened a typical driver body, and moved the threads from inside to the outside, and further inboard.

Instead of an outboard lock ring that tightens the cassette onto the driver body, the XD cassette has a threaded seeve inside the cassette that pulls it into place. Hilton says this design allows SRAM to buld the cassette as one piece with no loose cogs or lock rings. This means you won't need ANY tools to remove the cassette! 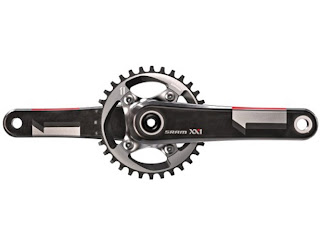 While there's nothing new with XX1's crank arms the X0 carbon arms with a forged-aluminum spider is optimized for use with a single ring. Offered with either BB30 or GXP axles, and in both 156mm and 164mm Q-Factor. XX1 bottom brackets use ceramic bearings.

It's easy to swap rings, thanks to threads on the chainrings themselves, which means you don't have to worry about losing any nuts, should you choose to swap rings mid-ride. But, because the derailleur's performance is dependent on having the right length chain, adding or removing a few links may be necessary if you change to a ring that has more than a four tooth difference from what you're currently running. But, Hilton says that in most cases, moving up or down one ring size should not require altering chain length. 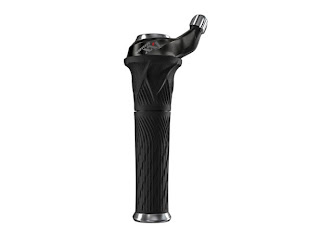 Because XX1 is designed around a single ring, and doesn't need to shift, the chain can be more robust. The 11-speed specific chain is slightly narrower than SRAM's 10-speed chain, and requires an 11-speed power lock. SRAM says the chain features a proprietary finish on the inner links, which consists of a coating and polish that gives it a slick, hard finish to reduce wear between the plates. The chain has hollow pins and windowed links, and weighs about the same as a SRAM 1090r 10-speed chain.

Other than the extra click, XX1 shifters are basically identical to X0 2x10 triggers. There is, however, a carbon pull lever, and carbon cover. Or, you can opt for a GripShift changer, also nearly identical to it's X0 cousin. The shifters come with Gore Ride-On cables.