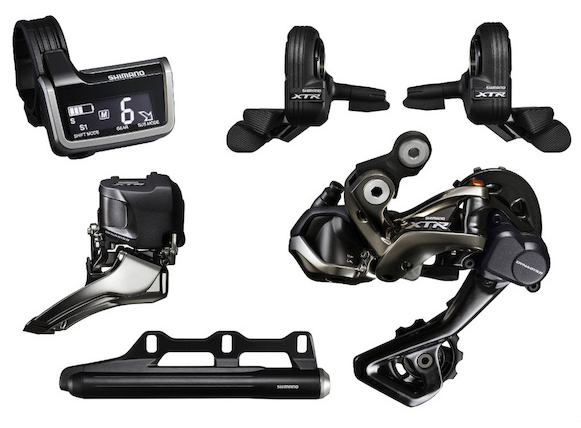 Swap Out Your Derailleur Cables For Electric Wiring

As with the road versions of the system, XTR Di2 electronically relays signals from the shifters to motors in the front and rear derailleurs. This means that shifts are consistently quick and smooth, as they aren't affected by the slackening of stretched steel cables or by contaminants within cable housings.


Drawing on more than half a decade of past
experience with Di2, Shimano has no qualms calling the 9050 the most advanced Di2 system yet. Many of the possibilities with XTR would not have been possible without the advancements of the E-Tube wiring system (which means the system isn't wireless yet).

Shimano's XTR M9050 Di2 front and rear derailleurs are exactly the same in operation and configuration as the mechanical M9000 items, with the exception of their servo-motor modules. The Di2 system is designed to sync with all of Shimano's new 11-speed components, including single, double and triple chainring cranksets.

As expected, M9050 requires the same Sil-Tech HG 11 chain that the mechanical XTR group uses, as well as the new 11 x 40 M9000 cassette. Basically then, the XTR M9050 Kit constitutes an electronic front and rear derailleur, a pair of Firebolt shifters, a handlebar-mount system display, a battery module, an E-tube wiring kit and a battery charger/computer interface device.

Because the thumb levers on the new Firebolt shifters don't have to be aligned with a mechanical mechanism, they're free to be rotated around the shifter body in order to best suit the rider. Their default position is also said to be more ergonomic than that of regular shift levers, plus they require less effort to push.

Additionally, using the Shimano Synchronized Shift function, the system can shift both the front and rear derailleurs at once via a single shifter. The system coordinates the two derailleurs with one another, so that they shift together to attain the desired gear rations without "cross-chaining."

Shimano has built in two different customizable shift maps which allow you to change when the front derailleur shifts if the terrain or personal preference warrants it, and the Display Unit can be set to put out an audible alarm that will sound just before an upcoming front shift. Riders can choose to run two shifters and change back between Synchronized Shift modes and manual or ditch one of the shifters completely.

This also offers the ability to run a left or right shifter only, which could be very handy for adaptive bikes where a right shifter (or left for that matter) may not be an option.

Speaking of shifters, XTR 9050 ushers in the new Di2 Firebolt which is a complete new take on the way mountain bike shifters are designed. Since they are simply buttons, Shimano was able to design a shifter that they say is perfectly designed with ideal ergonomics. The rotary design places two buttons directly at the tip of your thumbs. Each lever position can be adjusted independently and the buttons offer what Shimano calls "short stroke, perfect click."

Like other Di2 shifters, the Firebolt shifters are fully programmable including multi shift, shift speed and control of Fox ICD suspension. Changes can be made by connecting your bike to your computer through the battery charging USB cable and Shimano points out that you can program the shifters to perform whatever function you need them to.
Di2 M9050 Component Weights:
• Front derailleur (D-type): 115 grams
• Rear derailleur (GS): 289 grams
• System display: 30 grams
• Shift switch: 64 grams
• Battery Module: 51 grams

Pricing has yet to be announced, and availability is scheduled for the fourth quarter of this year.